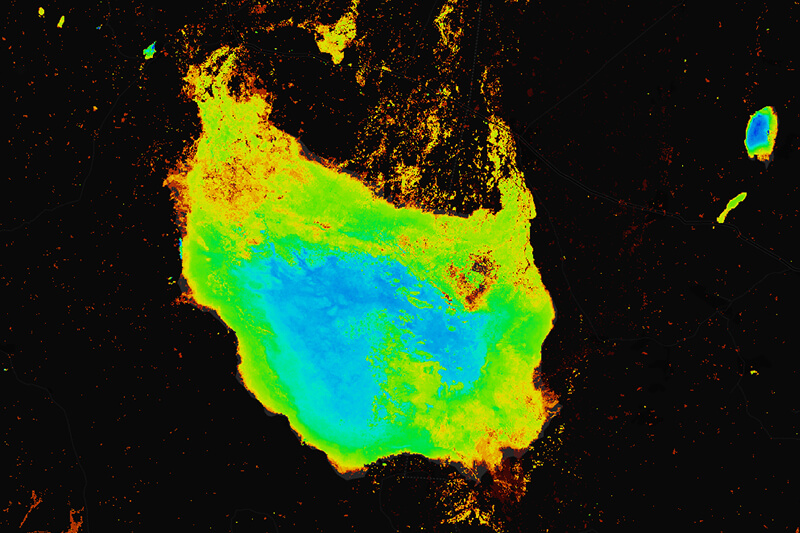 Most countries in Africa lack statistics on environmental degradation and subsequent climate change impacts. Tanzania is vulnerable to extreme weather events and disasters. Currently, more than 70% of all natural disasters in Tanzania are climate change related and are linked to recurrent droughts and floods. The NBS has been conducting research on how to monitor and report on Sustainable Development Goal (SDG) Indicator 6.6.1 - change in the extent of water-related ecosystems over time, and more specifically the spatial extent of water-related ecosystems.

Lake Sulunga, also known as Bahi Swamp, is in Central Tanzania and relied upon by many surrounding settlements for drinking water, fishing, agriculture, livestock farming and salt production. Using DE Africa services, the Tanzanian NBS was able to gather valuable insights to improve policy to protect Lake Sulunga and the communities who depend on it for water, food, and income.

The Tanzanian NBS have been among the first advanced users to transition to the new DE Africa continental-wide infrastructure from the Africa Regional Data Cube (ARDC). Following its launch in May 2018, the Africa Regional Data Cube (ARDC) initiative has proven the value of open data cube technologies in providing access to data for decision-making in five African countries (Ghana, Kenya, Senegal, Sierra Leone and Tanzania). DE Africa is the evolution of the ARDC from a trailblazing capability for five countries to a fully operational, continental scale data and information infrastructure.

DE Africa worked with Mr Mugambi to transition the NBS to the new platform and conducted further analysis of Lake Sulunga using the Water Observations from Space (WOfS) available both in the DE Africa Map portal and DE Africa Sandbox interface for advanced analysis. This has allowed for time-series analysis over a six-year period from 2013 to 2019 to plot the minimum and maximum water extents. This type of analysis helps monitor the lake for variations in volume and depth to understand and plan for those times throughout the year. The insights gained are already helping the government improve policy and make informed decisions to contribute to SDGs. 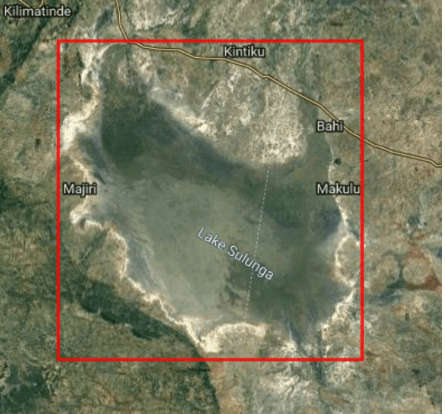 Lake Sulunga extends on latitude 6.26, to 5.87 South and longitude 34.99 and 35.37 East. The lake measures about 25 km wide and 42 km long, and lies 45 km west of the capital, Dodoma. The communities who live around the lake depend on fishing and animal husbandry for their livelihoods. During field visits conducted by the NBS, the reliance on the lake for community survival was clear.

The choice of dates was guided by field visits to the region and information provided by the local community about extreme weather events in the area (mostly droughts but also occasional flooding). Further analysis was conducted to compare two distinct time periods from 2014 to year 2017 and results showed a 4% reduction in lake area over this time.

Fieldwork conducted by the NBS revealed communities have been resettling on the banks of the lakes as it shrinks, as these areas are more fertile for agriculture. This poses a risk to these communities when floods occur, as their properties and dwellings are destroyed. Using data captured over the 5 year period, the NBS has been able to demarcate the actual boundary of the lake from the images supplied by DE Africa to protect citizens from flooding.

The DE Africa team were able to offer additional support to the NBS by animating the data captured over the 5 year period. The NBS shared the animation with the office of the Prime Minister as part of their role in offering advisory services on environmental statistics. The NBS are now using the DE Africa platform to investigate incidences of land degradation in Tanzania in other regions (specifically in Shinyanga).

This video demonstration shows users how to use the DE Africa map, and how to run a sandbox notebook for measuring water extent. Access our water services from our platform.