Cities across Africa have experienced rapid urban growth since the 1950’s, with a particularly sharp increase over the past decade. The rapid growth, which shows no sign of letting up, can be attributed to a number of factors, including urban migration, shifting urban centres and growing population density in rural areas, which can blur the definition of what constitutes a city (OECD 2021). While urbanisation can boost economies and individuals via improved job prospects or increased earning potential; rapid, unplanned urbanisation can also result in a great strain on countries and their people. Inadequate and overburdened infrastructure, pressure on essential services, insufficient housing and worsening air pollution are just some of the knock-on effects of an expanding urban population.

Studying patterns or trends in urbanisation helps policy makers to determine appropriate measures to take in creating and implementing a sustainable urban development plan, and multilateral organisations are advocating for greater monitoring and action in this space. The UN-Habitat has advocated for countries to commit to the New Urban Agenda, which advises countries to adopt various measures to help them perform against the UN Sustainable Development Goals (SDGs) - particularly SDG 11 - sustainable cities and communities stated as follows:

Earth observation (EO) is important in mapping and monitoring the environment including urbanisation. Digital Earth Africa (DE Africa) is dedicated to providing free and open EO data and analysis tools to produce decision-ready Earth observation products and services. These products and services are being used by individuals and institutions across Africa to monitor the trends and impacts of urbanisation, and to help tackle some of the continent’s greatest sustainability challenges.

EO to monitor urbanisation in Uganda

Hans Sentamu has been working with Dr Jane Bemigisha, Executive Director at ESIPPS and DE Africa Implementing Partner, Regional Centre for Mapping of Resources for Development (RCMRD), to better understand how urbanisation is impacting one particular area in Northern Uganda - Gulu City.

Dr. Bemigisha already had experience with Earth observation in the region, having worked on mapping land cover and land use for wildlife conservation in the area after completing her PhD. These were different times - there was no open, free source of EO data, so Jane needed to download and process imagery from a number of sources. This time around, Dr. Bemigisha was pleased to get all the data she needed from one place - Digital Earth Africa.

In the aftermath of a decade-long armed conflict in Northern Uganda, drastic changes in the land use of Gulu City , formally Guli Municipality and the surrounding areas were anticipated. Economic activities recovered and began to increase, encouraging surrounding populations to migrate to the area seeking business and employment opportunities. According to the latest Uganda Bureau of Statistics Housing Census (2014), (Uganda Bureau of Statistics 2016),  Gulu City has experienced  significant growth in its population: from 38,297 (1991), to 119,430 (2002), finally reaching 149,802 (2014), * .

Under the mentorship of Dr. Bemigisha, Hans Mark Sentamu has worked with DE Africa experts to explore the DE Africa platform to assess changes in the extent of Gulu City. In this example, Hans used the urbanisation change detection algorithm, which examines the change in urban extent between a baseline period and a more recent period.

“My analysis experience was much easier,” Hans explains, “since I was able to assess the changes online without the need to download data or have access to a powerful supercomputer.”

Another benefit of the DE Africa platform is the free and open availability of Sentinel-2 GeoMAD at 10 metres spatial resolution, which provides annual cloud free mosaics from 2017 to 2020 and makes the study of urbanisation over Gulu, which is usually an area with seasonal cloud cover, possible.

The DE Africa urban growth algorithm shows the difference in urban extent (area in square kilometres) between the two periods, along with a map highlighting the location of urban growth hotspots. Gulu was identified in the DE Africa platform at the latitude 2.779779 and longitude 32.288303 with a buffer distance of 0.035.

The DE Africa urban growth algorithm was then used to compare the Sentinel-2 GeoMAD for the years 2017 and 2020.

The DE Africa urban growth algorithm uses the Enhanced Normalized Difference Impervious Surfaces Index (ENDISI), which was recently developed as an urbanisation proxy that works well in a variety of environments (Chen et al. 2020) as shown in Figure 4.

In conclusion, the algorithm shows the potential urbanisation hotspots as shown in Figure 7 with the legend indicating areas that have experienced “Urban growth” shown in Red, “Urban decline” shown in blue and “Remains urban” shown in grey.

The urban extent of Gulu Municipality between 2017 and 2020 was recorded as an increase from 12.289km2 to 16.606km2 - growth of approximately 4km2. Urbanisation has been mostly along the major roads (shown in red). Ground truth data would support these findings.

By delivering impactful analysis in a short time frame and with free and open data, DE Africa provides a powerful platform to inform policy makers in the design of sustainable cities.

Hans and Jane will continue to explore the Digital Earth Africa platform in conducting more assessments of cities in Uganda. Further, their institution provides advisory services in the field of natural resource management. The Digital Earth Africa platform will be useful in the engagement with the policy makers across all sectors from agriculture, water, urbanisation and management of natural resources 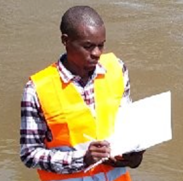 Hans Mark Sentamu is a GIS expert with ESIPPS International Ltd and graduated with a Bachelor of Science in Land Surveying and Geomatics from Makerere University in Uganda. Hans has been engaged in various projects at ESIPPS including Geo-spatial analyst on the Wetlands Vulnerability Analysis Using GIS Analysis Tools, Remote Sensing analyst on Enhancing Sustainability and Resilience of African Cities through a Water-Energy-Food Nexus Approach (EnsureWEF) Project. Hans used the Digital Earth Africa platform to study urbanisation in Gulu using the Digital Earth Africa. Hans received mentorship from Dr. Jane Bemigisha on this use case. 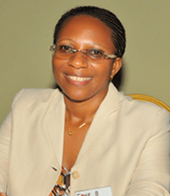 Dr. Jane Bemigisha is the Executive Director, ESIPPS International Ltd. She holds a PhD in natural resources from Wageningen University, and the International Institute for Geo-information Science and Earth observation (ITC), the Netherlands.